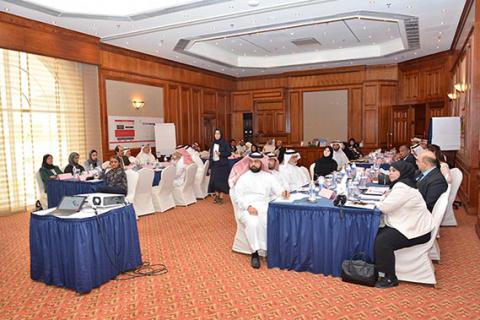 Civil Service Bureau(CSB) has organized four brainstorming sessions for assistant undersecretaries and their counterparts in government entities, which comes in line with the strategic directions of the civil service that was approved by His Excellency Sheikh Khalid bin Abdullah Al Khalifa, Deputy Prime Minister and Deputy Chairman of the Civil Service Board during the inauguration ceremony of the Organizational Performance project "Takamul".

Mr. Adel Heji Ebrahim Mohamed, Director General of Human Resources Development and Performance Management, confirmed that the brainstorming sessions are an integral part of Takamul project, which includes defining strategic objectives, setting performance indicators and limiting strategic initiatives, he explained that the directives adopted by H.E Sheikh Khalid bin Abdullah Al Khalifa which addresses the support of knowledge and creativity, investment in the citizenry, a prosperous economy and world-class infrastructure, as well as redefining the role of government to improve the efficiency of services and projects.